As a purebred operation, your reputation and ultimate success is based upon the herd’s genetic potential and breeding performance. To achieve optimum performance, your trace mineral program should be given as much consideration as the reproductive traits you select.

The role of trace minerals in animal production is an area of strong interest for producers, feed manufactures, veterinarians and scientists. It is important to understand how trace minerals work, and that an optimal balance is the key to their performance success in the animal. Immunity, growth and reproduction in the cow herd are influenced by adequate trace mineral intake. Balance among trace minerals often poses challenges due to antagonistic interactions (e.g. high iron levels can decrease absorption of zinc, copper and manganese), therefore careful attention should be made to dietary levels and ratios.

Trace minerals that have been identified as important for normal immune function and disease resistance include zinc, iron, copper, manganese and selenium. A deficiency in one or more of these elements can compromise the immuno-competence of an animal. The first level of defense in the immune system is the skin. Zinc and manganese are key elements for maintaining epithelial tissue integrity. We recognize the lining of the respiratory tract, lungs, gastro-intestinal tract and reproductive tract are comprised of epithelial tissue. Maintaining integrity in these tissues can result in a reduction of infiltration by pathogens.

In the presence of stress (transport, vaccination, disease etc.), trace mineral status of the animal is critical in minimizing negative effects on production. Stress can potentially reduce trace mineral statusdue to a decline in the animal’s ability to retain specific trace minerals, therefore ensuring that the animal has an optimal status before any stressful event is the key to maintaining a healthy animal. 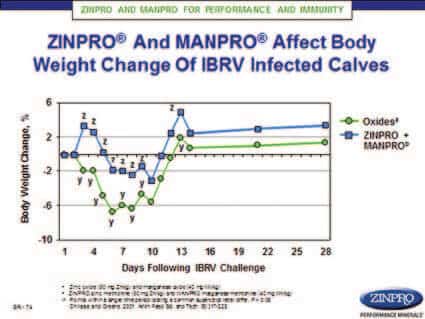 The immune system needs to be responsive and capable of meeting any challenge. Copper and Zinc maintain the functions of this system through development of antibodies, antioxidant enzyme production and many other processes. Zinc deficiency has been shown to have an important impact on immunity, recovery rate in infectious bovine rhinotracheitis virus-stresses cattle and antibody increase against bovine herpesvirus-1. Adding organic complex trace minerals improved responses compared to similar or higher levels of inorganic trace minerals. 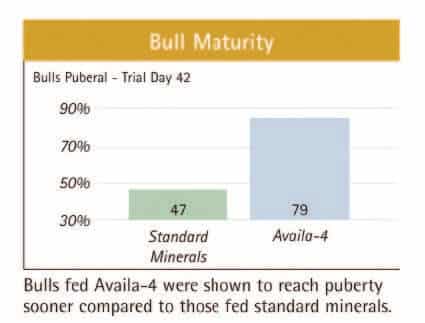 The effect of trace minerals on reproduction in bulls, heifers and cows respectively is discussed below. 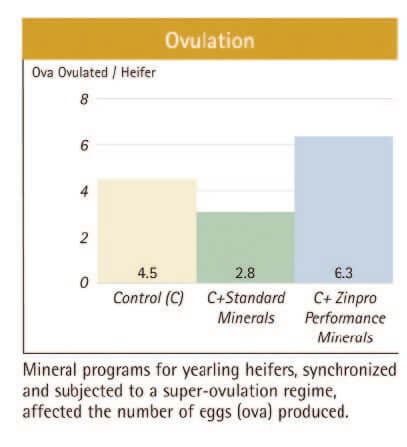 For many producers, optimal ovulation and AI conception rates are key factors for successful breeding programs. While weight and maturity are important, heifers and cows must also cycle normally.

Manganese is essential for heat cycles and response to synchronization programs. Improved pregnancy rates are also a benefit of correct manganese supplementation.

Zinc is critical for uterine involution and proper recovery after calving. It is also important for the development of viable eggs (ova). 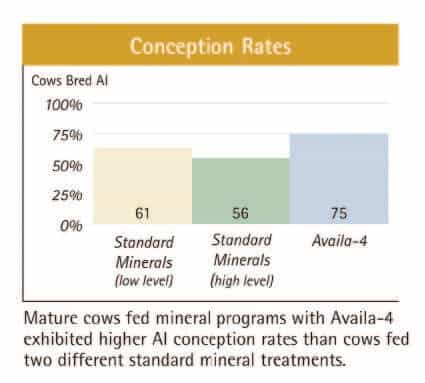 days earlier, a 17 to 35% improvement in conception rates. An increase in number of ova ovulated per heifer (6.3. versus 2.8) when females fed complex trace minerals were compared to those fed iso-sulphate forms has also been observed. Improving reproductive performance of beef cows by achieving confirmed conception rates early in the breeding period can have economic return to the producer.

Zinc, copper and manganese all play a role in the growth process and all serve as components in numerous enzyme systems associated with carbohydrate and protein metabolism. Manganese is also instrumental in skeletal development and growth in young animals. Copper is required for synthesis of collagen and elastin fibers that provide structure and elasticity to connective tissue and blood vessels. Zinc is essential for epithelial tissue integrity, cell division and repair, and uptake transport mechanism and utilization of Vitamin A and E. A study in beef calves showed a decline in animal performance when no zinc was added.