The genetic growth potential of modern broilers, combined with high quality feed with readily available nutrients and sugars results in fast growth. However, the vascular integrity of the birds is at stake. Blood vessel fragility increases the risk of carcass lesions and subsequent downgrades in the abattoir.

Severe cases of carcass bleeding, although only a cosmetic problem, makes the product less attractive to consumers. [Photos: Wim Tondeur]
Managers of poultry processing plants all around the world are increasingly worried about the incidence of carcass lesions in broilers. “Up to 20% of the birds are affected by bruises, muscle hematomas and vascular damage,” says veterinarian Paco Fernandez Lopez-Brea with Zinpro Corporation. As a result the meat from the birds has a cosmetic defect, making it less attractive for consumers.

Abattoirs have to downgrade part of the birds or trim the affected part, making it more laborious thus costly to process them. “With bleedings or hematomas in legs and wings, trimming is not an option of course. That goes also for whole birds. Another problem with whole birds is that the majority of bruises cannot be seen from the outside. Consumers see the damage only after cut-up in the kitchen, leading to complaints at supermarkets and the processors.”

Veterinarian Fernandez Lopez-Brea first heard of the problem while visiting a processing plant in Spain, later he learned that the scope of the problem was a lot bigger. He said: “I asked my Brazilian and northern European colleagues and they saw the same.” But what was causing the carcass lesions still wasn’t identified.” One of the first hypothesis was that the lesions were caused by muscle contractions during stunning. “It didn’t take long to rule that option out. The methods didn’t change over the years, but the number of bleedings increased. Also, birds taken out of the crates before shackling showed lesions.” Fernandez states that the problems in Spain were so severe the managers of the processing plants went out in the field, overlooked every step from catching of the birds, transport until they were on the hook and they still weren’t able to identify the source of the problem.

Another hypothesis Fernandez investigated what the possibility that toxins were the cause of vascular fragility and thus the bleedings. Mycotoxins, in many cases could be ruled out, but other toxins such as endotoxins from gram negative bacteria could be the smoking gun. “The million dollar question was where the toxins came from,” says Fernandez. He found his answer in human medicine. “The problems with the birds resembled problems that occur with humans suffering from diabetes. Research in humans learned that diabetes is growing in the US , Saudi Arabia and many other countries. But it isn’t caused by overweight due to unsaturated fat, but by the over consumption from mono and poly saccharides, i.e. sugars.”

A common problem in humans suffering from diabetes are small spots of bleeding in the skin and easy bruising, caused by capillary fragility, weakened small blood vessels, as well as vascular problems in general, such as retinopathies, nephropathies as well as cardiovascular and cerebral problems such as stroke. 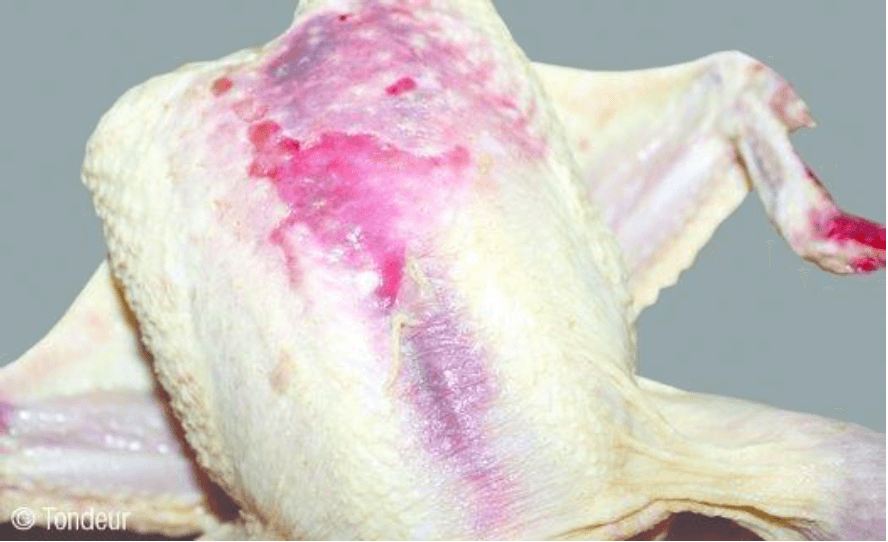 Metabolic speed of the broilers has changed

Fernandez: “What we do know is that the ever increasing metabolic speed of the broilers has changed and our increasing knowledge of feed. We grind our feed very fine, expand it and do everything to make all the nutrients readily available. In essence we are giving our birds ‘fast food’ 24 hours a day.” It is the proverbial avalanche of sugars, that could well be the culprit. In wheat based diets the problem seems to be bigger than in corn based diets. Fernandez: “If the glucose goes up, so does the oxidative stress. The free radicals produced in the mitochondria inside the cells can destroy them as seems to be the case with pancreatic cells in diabetic people.

Apart from that, we frequently see fatty liver problems in birds 40 days old, something that is pretty shocking. According to Lopez-Brea, Free Radicals induced by the glucose excess attack the ‘velcro’ that keeps the enterocytes tight together, the so called ‘tight junctions’. When the gut permeability is compromised, endotoxins from the intestinal lumen penetrate between one enterocyte and the other and go straight through the portal vein into the liver. In the liver, they produce an inflammatory reaction in the Kupffer cells and later in the hepatocytes, leading to their destruction

and replacement by fat and connective tissue. “We have to be honest, we don’t have the 100% proof that glucose and fructose are the damaging agents, but we do know that the more the feed is processed, the more bleedings we encounter.”

A logical way to lessen the impact of sugars is to switch to a feed that releases the energy more slowly. “I know for a fact that some people are replacing the standard pelleted diets by going back to mash feed and they reduced the carcass lesions quite a bit. Slower digestibility of food is the answer in humans too, but in broilers that is a huge step back in time.” Fernandez looked into the possibility of mitigating the problems in standard pelleted feed. 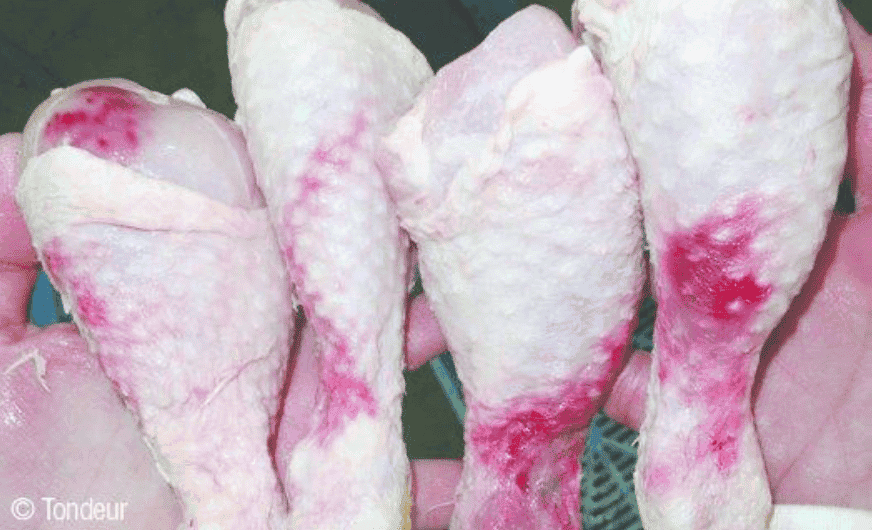 “The key is to prevent the excess of free radicals from destroying cells. Zinc is known to be essential for the activation of transcription factor function of Nrf2. Nrf2, is a Transcriptional Factor that up-regulates the production of superoxide dismutase (SOD) which in turn, catalyses the dismutation of superoxide radicals during biological oxidations and environmental stress.
In studies on human diabetes patients there is increasing evidence which showed the effect of zinc on diabetic complications.” More importantly the use of organic zinc (zinc complexed to single aminoacids like Availa®Zn) in broiler diets showed in field trials a reduction of 15-30% of bleedings, especially in the more severe cases. There has also been a scientific corroboration conducted at the Scottish Agricultural College, when we have seen significant reduction on hemorraghes in wings, even with mash diets.