In the current economic environment most commercial producers of animal protein find themselves in a margin squeeze between high input costs and relatively low corresponding product realisation. Feed costs are by far the highest single contributor to input costs in livestock systems. This has been magnified by recent increases in raw material costs, which have driven animal feed prices to unprecedented levels. In the light of this development it is of paramount importance to ensure that diets are formulated with an optimal return to cost ratio. Thus, inevitably, not only macro-ingredients in the diet, but also micro-ingredients and feed additives must fall under the spotlight. A well-considered feed additive should be as effective in the producer’s strategy during good times as it is during times when margins are under pressure. Correspondingly, the additive which does not have an adequate return on investment is the most expensive, regardless of cost. With the recent increase in the global use of organic trace minerals (OTM), numerous new suppliers have entered the market. This has resulted in a plethora of choices being available to both producers, and nutritionists. It is thus useful to develop guidelines when evaluating the basic characteristics of an effective organic trace mineral.

METAL ABSORPTION IN THE GUT

Inorganic trace minerals commonly included in diets are solubilized by digestive fluids in the gut. It is believed that the dissociated metal ions move through the digestive system and bind to ligands, which facilitate their passage from the lumen of the intestine into the cells of the intestinal wall(1). Two limitations, however, come into play: firstly many free metal ions do not find a ligand and simply pass through the gut and are excreted, and secondly, antagonists bind to the free metal ion, making it unavailable for absorption (Figure 1). 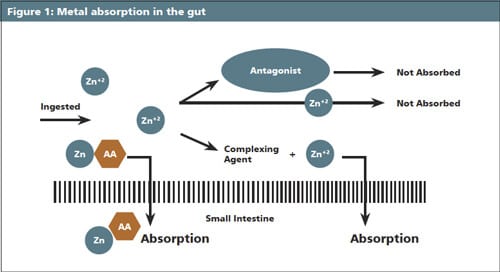 In the case of an organic trace mineral, the metal ion is pre-bound to a ligand. The organic trace mineral is thus theoretically not affected by the digestion process and should move directly to the gut lining for absorption. Thus organic trace minerals allow more metal to be absorbed and increase the trace mineral status within the animal relative to inorganic  traceminerals(2). Animal response trials have confirmed increased performance through the use of organic minerals, as it would appear that some form of “saturation point” is reached beyond which increasing the supplementary inorganic mineral level in the diet has no impact on performance. However, feeding supplementary organic trace minerals beyond this “saturation point” continued to increase performance. This was clearly demonstrated by Cheng et al.(3) in relation to the application of zinc in broilers. Modern livestock, and in particular poultry, have made marked genetic advancements over recent decades, resulting in the necessity for parallel progress in dietary formulation in order to optimise potential. Much of this progress has focused on protein and energy nutrition, with mineral nutrition being neglected. It is thus essential to consider that the above-mentioned trace mineral “saturation points” could become limiting factors to performance. Logically providing trace minerals from a source that increases bioavailability to the animal will further allow for a lower inclusion rate in the diet and thus minimize mineral losses in animal excreta, which is an  increasingly prominent environmental issue.

In order for an organic trace mineral to be effective, there are essentially four key criteria that need to be met. Organic trace minerals must: Solubility, High water solubility is a key component of an effective organic trace mineral. Insoluble materials will not be absorbed in significant concentrations and will pass through the digestive tract of the animal. Some trace mineral forms have low solubility in either water or acid. For example Zinc Sulphate was found to be more water soluble than Zinc Oxide(4).  Different organic trace mineral categories have different chemical properties, with solubility varying between chemical types. A study by Guo et al.(5) demonstrated a wide range of solubility between organic copper sources. Stability of an organic trace mineral as it passes through the digestion process is also an important characteristic. Typically an animal diet is filled with reactive materials such as phytate (which is known to decrease zinc absorption(6), especially at low pH in the hind gut), fibre, clay and minerals that will bind to free metal ions and make them unavailable for absorption. The rumen and digestive system also contains micro-flora which will deplete the mineral pool. A trial by Wedekind et al.(4) demonstrated that the increase in the availability of zinc from zinc methionine relative to zinc sulphate was greater in a commercial diet with higher levels of antagonists than in an experimental diet formulated to minimise dietary antagonists. It could thus be suggested that the organic mineral has a “buffering” effect against the variability of dietary antagonists that may be present. An organic trace mineral is defined as a trace metal bonded to an organic compound. Just because a product is called organic does not mean that it will provide the necessary characteristics to be effective. For example, a single amino acid ligand is able to form a stronger bond with the metal ion compared to a peptide ligand(7). A protein will form the weakest bond with a metal due to the size of the protein ligand and to the effects of steric hindrance in finding the bonding site. The molecular weight of the protein in some trace minerals is more than 100 000 Daltons (or 500 – 600 amino acids in length). Ligand fractionation of proteinbased organic trace minerals also confirms the scientific property that metal atoms are unlikely to bond to large peptides or proteins(8). Hydroxy acids bound to a metal ion are also known to have a significantly lower stability constant than single amino acids(9). Absorption and bioavailability – Improving absorption is the most critical characteristic of an organic trace mineral. The molecular size of the organic trace mineral is one key to improving absorption. Research has shown that single amino acids are absorbed intact and can be found in the portal blood of animals(10), and that it is possible for the small intestine to absorb these(11). The size of a high proportion of the absorbed molecules were estimated to be <300 Daltons(12). Larger peptides and proteins will be hydrolysed into small peptides and amino acids in the digestion process in order to be absorbed. The fate of the metal ions bonded to these peptides and proteins is not known. There is general agreement that bonding a metal to an amino acid will improve absorption(4). Amino acids will form a strong bond with the metal, protecting it from antagonists as it moves through the digestive system, and thus improve absorption. Bioavailability is an often misconstrued term which means different things to different people. It is perhaps best defined as the percentage of a total nutrient in feed ingredients that is actually utilised by the animal. Some nutritionists have incorrectly compared the bioavailabilities of various sources of zinc using several studies based on different species. Even though these studies show different levels of bioavailability, comparisons between these sources are scientifically invalid. Since researchers are measuring relative bioavailabilities, comparisons can only be made w ithin each study. A further, common misconception in relation to bioavailability is that the protein metallothionine (MT) in the animal is a good indicator of the uptake, and hence bioavailability of certain minerals such as zinc. This protein has indeed been shown to be an inducible protein with the basis for this induction proposed to protect the animal from cellular damage where toxic levels of heavy metals are administered(13). However, the fact that MT binds to a variety of metals including cadmium, copper, mercury, and zinc(14), makes assumptions on the bioavailability of specific minerals difficult. Further complication is added by the fact that MT protects the animal against oxidative stress by scavenging reactive oxygen species such as superoxide. Thus the level of oxidative stress, which the animal is facing, will also affect the MT level, and not only the zinc source. Metal Concentration – Complex minerals use single amino acids as the ligand where peptide forms use dipeptides and tripeptides which have higher molecular weight. Proteinates use protein as the ligand which likely has even higher molecular weight. As the size of the ligand increases, the metal content in the one-to-one organic trace mineral will decline. On the basis of this principal, the maximum zinc content of an organic mineral could range between 21% in the case of a single amino acid bound to the metal ion, through to <3,9% in the case of a zinc polypeptide (with 10 or more amino acids).

Whilst understanding the chemical structure and properties of organic trace minerals provides insight into expected results, this is ultimately not the information on which purchasing  decisions are based. Repeatable animal response in well-designed research trials is essential to establish economic response. To this end a large body of work has been done on the efficacy of a metal ion bonded to a single amino acid, summarised as follows: Although some research has demonstrated a neutral effect, the majority of research work with a single amino acid bonded to a metal ion is overwhelmingly positive. Little conclusive evidence from field trials was however available on the efficacy of a metal ion bound to a specific non-essential amino acid. It is suspected that this is due to the lower absorption of this amino acid(17), possibly due to its achiral nature. Products produced by bonding a single metal ion to a peptide have also shown varied results, some positive, but many neutral. Copper bioavailability of an OTM produced by bonding copper peptide was higher than inorganic copper for ruminants(18), but many other researchers obtained contradictory results(19) demonstrating no difference between inorganic copper and this OTM copper peptide form. Kidd et al.(20) found that feeding zinc methionine / manganese methionine increased phagocytic and tumoricidal activity of macrophages in turkeys, while feeding inorganic sources of the same minerals had no effect. This study demonstrates that complexed trace minerals may be more effective than inorganic sources in enhancing immune responses.

A final consideration in choosing an effective inorganic trace mineral should be the reassurance that goes with the product in terms of manufacturing certification such as ISO, HACCP, and other quality control systems which allow for consistent quality.

Investing in a an effective organic trace mineral can effectively be based on a decision taking into consideration return on investment, repeatable responses in field trials, a good research foundation through peer reviewed papers, and finally reassurance that the product will be manufactured to continually high standards. Whilst several competitively priced options are available, failure to meet these criteria could result in the purchase of your most expensive additive.

Available from AFMA on request.