High global maize prices have resulted in what is termed a ‘wheat window’ in several parts of the world including South East Asia, the USA and most recently, South Africa. A ‘wheat window’ is created when in conventional maize-based feed markets the opportunity costs or shadow price of local or imported wheat in leastcost feed formulation falls below that of maize. Replacing all or some of the maize in the diet with wheat can therefore potentially reduce feed cost in times of high maize prices. However, to ensure similar broiler performance, some basic nutritional principles of formulating with wheat must be adhered to. The most pertinent of these is a correct assessment of wheat quality and nutritional value relative to maize in poultry diets. Due to infinite combinations of wheat cultivars and harvest conditions, the ME and digestible nutrient content of wheat can potentially be far more variable than for maize. For example, (McNab, 1991) found the range in TMEn of 72 wheat samples sourced within a single country (UK) varied by over 1.8 MJ/kg (430 kcal/kg) dry matter, or 8% of the wheat ME value. Traditionally, variable viscosity effects of wheat have been the primary factor associated with variation in wheat feeding value. However, more recent data has shown that in addition to viscosity measurements of wheat, other factors such as endosperm hardness and ash% were important in describing variation in the wheat starch digestibility and performance of broilers (Carré et al., 2002; Pirgozliev et al., 2003). The large variation in the metabolizable energy (ME) content makes an assessment wheat quality, and which selection of enzymes to use, a prerequisite to capture its  nutritional value and maximize feed cost savings without negatively affecting broiler performance in the field.

Variation in wheat viscosity and broiler performance It is well documented that including wheat in broiler diets without addition of appropriate enzymes can result in adverse effects on broiler performance as a result of reduced digestibility of dietary fat and protein, linking to a reduced AMEn (Choct and Annison, 1992). Negative effects of wheat on fat and protein digestibility have primarily been ascribed to the high levels of soluble Non-Starch Polysaccharides (NSPs), and their associated effects on increased digesta viscosity (Langhout et al. 1997). Interestingly, in spite of the negative effects of wheat viscosity on fat and protein digestibility, there is little effect of viscosity on starch digestibility (Maisonnier et al. 2001). In addition to direct negative effects of viscosity on nutrient absorption, viscosity also exerts indirect effects of reduced rate of feed passage, reduced feed intake, increased water consumption, increased proliferation of bacteria in the intestine, and poor litter quality (Cowieson et al., 2005). Combined, these factors all contribute to a strong correlation that has been observed between in-vivo digesta viscosity in the chicken gut and broiler performance (Figure 1).

Consequently, to more effectively include wheat in diet formulations, an in-vitro screening method that can predict the in-vivo ME value is required. Initial attempts at developing in-vitro methods that could accurately predict in-vivo viscosity and broiler performance over a broad range of wheat qualities were largely unsatisfactory due to poor correlation coefficients between the predicted and observed response (Claasen et al.1995; Jeroch et al. 1997). Pack and Bedford (1997) subsequently refined the in-vitro method by introducing a proprietary enzymatic digestion step before extracting the soluble fibre components. The resulting AvicheckTM method provided the first strong correlation between in-vitro extract viscosity (cPs) and in-vivo digesta viscosity in broilers. This methodology has been used to screen hundreds of wheat samples world-wide since 1997. An excerpt of the data from selected countries for the 2010 harvest year is shown in Table 1. The large between- and within-country variation in wheat viscosity (cPs) clearly highlights the potential variation in feeding value that is caused by regional differences in wheat cultivars and their growing conditions. Screening wheat samples at the time of harvest, or prior to importing large shipments of wheat, should therefore be an integral part of assigning relative ME values and determining the economic value of wheat in diet formulation.

Enhancing wheat nutritional value with enzymes The application of exogenous xylanase to wheat-based diets has become a  standard practice in the poultry industry over many years. The main benefits of xylanase use include: 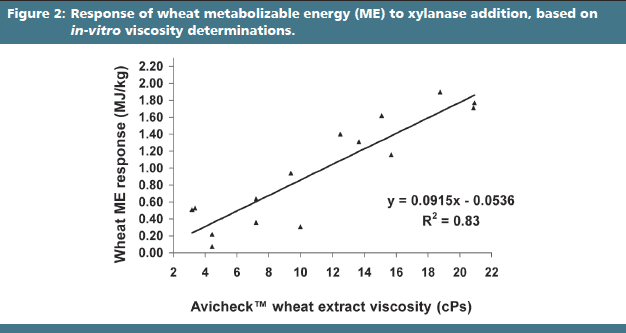 However, of all these factors, a reduction in the viscosity of the contents of the gastrointestinal tract has been the most cited (Bedford and Schulze, 1998). Importantly, the nutritive benefits derived from xylanase addition are by no means constant and are dependent on the physical and chemical constituents of the grain, its inclusion rate, thermal processing conditions, and the affinity of the enzyme for its substrate (Cowieson et al., 2006b). As the enzyme response on wheat ME value is not constant, it becomes important to be able to accurately predict effects of enzyme addition on ME and amino acid digestibility when the enzyme is applied to wheat with either low or high feeding value. An example of some of the trial work that has been used to develop such prediction equations using a specific xylanase produced by Danisco is shown in Figure 2.

The data in Figure 2 demonstrate that the enzyme response in ME in broilers can accurately be predicted as a linear function of increasing extract viscosity of wheat in-vitro using the AvicheckTM assay. Importantly, the ME response to enzymes was also shown to be a function of the dose of the xylanase enzyme with ME improvements to xylanase addition being a function of both the initial quality of the wheat (expressed in cPs), and the dose of the xylanase used (data not shown). Background knowledge of these important inter-relationships for a specific xylanase source is therefore crucial to establishing the economic breakpoint at which wheat can replace maize in broiler diets.

Responses to protease in wheat In addition to viscosity, variations in the nutritional value of wheatbased diets have also been shown to be correlated to the endosperm hardness of the grain, independent of its soluble pentosan content (Peron et al. 2008). An assessment of hardness is extensively used by the wheat milling industry as it has significant impacts on milling and baking characteristics (Pasha et al. 2010). Wheat hardness is thought to be determined by a continuous protein matrix in the endosperm that physically entraps starch granules, altering the physical properties of the wheat and the consequent accessibility to the starch. However, characterization of wheat protein content, moisture content, kernel size, and vitreousness have been shown to be poor predictors of the resulting hardness, which is best determined by physical methods that measure the force required to crush individual grain samples.

From a nutritional perspective, wheat hardness has been shown to negatively affect starch digestibility of wheat in broilers (Carré et al. 2002). This is in contrast to the effects of wheat viscosity that do not appear to strongly influence starch digestibility. Carré et al. (2002) speculated that the effect of wheat hardness on starch digestibility was the result of the interaction between starch granules and the protein matrix in the endosperm of protein in hard wheat; as well as being influenced by differences between hard and soft wheat in terms of particle size and the pelleting characteristics of the final feed. Regardless of its cause, other authors have shown endosperm hardness to significantly reduce unexplained variation in broiler growth rate, feed intake and FCR after wheat viscosity had been accounted for in the model (Pirgozliev et al., 2003). From an enzyme perspective, as wheat hardness is not determined by the soluble NSP content of the wheat, or its subsequent viscosity effects, it could also be expected that xylanase alone may not be sufficient to alleviate the negative effects of wheat hardness on nutrient digestibility and broiler performance. Therefore, although viscosity reduction definitely remains the major target for feed enzymes, a significant role for the addition of other enzyme activities and, in particular, protease enzymes has been established. This was first shown by Morgan and Bedford (1995) who showed improvements in broiler FCR when two different protease enzymes were added on top of a xylanase enzyme in wheat-based diets. Notably, in that study, the effect of protease was dependant not only on the source of the wheat, but also on the source of protease added. More recently, Plumstead et al. (unpublished data) has shown similar improvements in broiler bodyweight and FCR that responded in a dose-dependent manner when protease was added on top of a xylanase and amylase enzyme combination, and diets contained 55%wheat (Table 2).

A multiple enzyme strategy of Xylanase, Amylase, Protease (XAP), and phytase has been known since early 1990 as been being essential to maximize nutrient digestibility in maize-based diets. However, poor starch digestibility and variable effects of hardness also suggest that a similar enzyme strategy may also be required for wheat-based diets. Application of xylanase is mainly directed at reducing viscosity effects and address potential variation in fat and protein digestibility (caused by wheat viscosity). Although some trials have shown beneficial effects of xylanase supplementation on starch digestibility (Svihus et al., 2005), the inclusion of a protease enzyme in addition to xylanase will further improve the accessibility of amylolytic enzymes to starch granules in the endosperm by hydrolysing the surrounding protein matrix. The benefits of applying XAP in pure wheat or mixed wheat/corn-based diets have recently been studied in a series of trials conducted on a new combination enzyme. Results of individual trials confirmed the threeway XAP combination to perform well in either pure wheat or mixed wheatcorn based diets (Table 3).

In summary, wheat can be strategically used in conventional maize-based poultry feeds to reduce feed cost. The following factors should be considered when assessing this opportunity:

P.W Plumstead, A. Amerah and A. Peron, Danisco Animal Nutrition